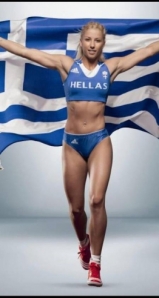 Not too long ago a Tweet by a UK MP sparked a rather vigorous public debate on racism in the UK. Now a Tweet from the Greek Olympic athlete Voula Papachristou that resulted in her expulsion from the Games is prompting a public debate in her home country, albeit one of a different nature.

To write a blog with a title containing the words ‘cultures’ ‘humour’ and ‘racism’ feels rather bizarre. This is because racism and humour are never compatible in my view, regardless of one’s cultural background. But owing to an explosion of support for Papachristou in social media, and as a Greek living in the UK, culture is precisely one of the issues I will discuss.

Voula Papachristou’s Tweet read, “With so many Africans in Greece.. At least the mosquitoes of the Western Nile.. will be eating home-made food.”

Although to many this is flagrant racism, a Facebook page in support of the young athlete has attracted over 20,000 ‘likes’ in less than 24 hours, accompanied by hundreds of comments denying racism, accusing authorities of hypocrisy, or containing ‘jokes’ of similar taste. Of course very many accept the accusations of racism, agreeing with the decision to remove her from the Olympic team, and the athlete continues to be severely criticised, but her expulsion clearly remains highly controversial.

While by no means seeking to legitimise Papachristou’s action, it is vital to bear the cultural dimension and national context in mind. Having worked in a European-level organisation I can certainly say I experienced the cultural dimension of humour, and further, approaches to dealing with issues of equality, first hand. Of course it’s anecdotal, I’m not claiming any grand generalisations which would only be hypocritical, undermining my cause.

As is the case for many issues including LGBT rights, women’s rights and so on, the Greek debate on racism is very different to the debate in Britain, or any other country for that matter. But my aim is not to assert some form of cultural superiority or imperialism by labeling one ‘better’ or ‘worse’ than the other or classifying one nation as inherently more or less prone to racism, not least because racism is still very real in both societies, and the state of such debates is never independent from a nation’s history and present-day context.

While Britain was busy colonising the world, Greece was under Ottoman rule for 400 years. In the 1900s Greece saw two world wars with a war against Turkey in the intervening period, followed by civil war and a military junta. Suffering its worst economic depression in recent history, the country is experiencing a (hopefully brief) rise of extreme nationalism, evidenced by the 6.9% support and 19 parliamentary seats obtained by the fascist party Golden Dawn in last month’s elections.

Some argue that the comment was merely a joke without any actual underlying racist sentiment. Racism is never a laughing matter and the term ‘racist humour’ is an oxymoron. Even dismissing it as humour implies that it is or should acceptably appear entertaining to some. The notion that it’s acceptable to make a joke of violence, oppression and discrimination is perverse and misguided, to say the least. Using the pretense of humour to propagate racism against the socially oppressed doesn’t make it legitimate. This is not about political correctness; it’s about reality.

People are being threatened, chased and beaten because of the colour of their skin. In September 2011, one migrant was stabbed five times. Human rights groups reported at least 300 assaults in the last three months. Two pregnant women were beaten and forced off buses. Earlier this month, masked individuals broke into homes at night, attacking several families. Approximately four years ago Greece introduced a hate crime law under which no one has been convicted yet. Authorities are failing to protect ethnic minorities. That’s racism. Still think it’s funny? Being on the receiving end of the brutality, I’m sure those ‘many Africans in Greece’ also see the humour in it.

Any arguments referring to the freedom of speech are invalid, when such speech is or fuels hate speech.

Others argue her expulsion was too harsh a measure, claiming the remark was nothing more than a young person’s foolish mistake. Despite the fact that her Twitter account suggests otherwise (as she follows a number of accounts directly linked with Golden Dawn), arguing she should be given the benefit of the doubt panders to racist rhetoric by legitimating it, whether intentionally so or not. An international athlete acting as a role model to many young people cannot be excused of making ‘mistakes’ encouraging prejudice and discrimination; ones that should never even be made in the first place.

The fact that thousands are rushing to Papachristou’s support highlights a much broader issue of awareness and education on racism, what it constitutes and how to combat it. This is not about an individual person’s Tweet, this is about wider societal mentality and attitude.

A further argument is that her expulsion is hypocritical. So be it, whatever the reason, this is not an excuse. Citing a dozen other examples of where racism is or was at play should not be used to validate claims of hypocrisy in the name of point scoring, but rather directed towards exposing and combating all forms of racism, wherever they exist.

Instead of pointing fingers and naming hypocrites, let’s take a step back from one person’s inability to participate in an international sporting event for which she has been preparing many years and look at the bigger picture; the everyday lives of immigrants in Greece over the past two decades, and particularly in recent months. Turning to hypocrisy is turning a blind eye to what is developing into full-blown institutionalised racism.

Immigration is a huge issue in itself, but if the debate is about immigration, then let’s have an open and honest debate about the nation’s policy on the matter and government’s broader attitude towards immigrants instead of defending racist remarks in the name of hypocrisy. Inciting racism is never justified.

Let’s call things by their true name: racism is racism. And it’s never acceptable, no matter where you live or where you’re from. Voula Papachristou’s Tweet is clearly racist, and her expulsion justified. Racism is very real, existing in our societies and in our stadia. Arguing Papachristou’s expulsion as either over the top, hypocritical, done in the name of political correctness or all of the above only serves to legitimise racism or at the very least detract from obliterating it, which is where we should instead be investing our efforts.